March 22, 2013
Since I did an "Eating at 7-Eleven Hong Kong" for my Hong Kong travel blog, I thought I might as well do one for Japan. ^_^ Most of the times, as a tourist, you can get very tired from all the sightseeing and from trying to speak and understand the local language. Eating at 7-Eleven is then the easiest option. I don't encourage you to eat there every day, but a trip to 7-Eleven once in a while, can really make your life a lot more convenient. That is why they are called convenience stores. ^_^ During my last two stays in Japan, I had went there for an easy breakfast (an onigiri or a pastry) and I had also bought dinner (cold noodles) a couple of times.

Food from 7-Eleven Japan that you must try

- Pastry. The first thing that wanted to try the most was the melon scented butter bread (aka Melon pan). I had always seen it in manga and anime and it looked quite delicious. The top sugary coated part that is supposed to look like the exterior of a melon has a little bit of a melon fragrance, but the rest of the bun is a plain, slightly hard bread. I thought it was similar to the Hong Kong pineapple buns, but it didn't have such a thick, highly flavored crust. The bread was also not as fluffy as I thought, or it could also be that the melon pan was laying there for a long time already. I cannot really be too demanding for a bun prepackaged in a plastic bag. I was however quite surprised to find a hamburger in a plastic bag, right next to the melon breads. It was not cooled and sitting next to other packaged breads such as Danish rolls and such. ^_^ I don't know if you can find this in their regular bread range, but I have bought a package of Rilakkuma pancakes for breakfast once. The pancakes were very soft and fluffy. It also had a very nice buttery and honey taste. The orange sticker on the plastic packaging could be used to trade for a cute Rilakkuma plate, but I was only there for a short period and there was no way I could eat 20 packs of pancakes in one day. ^_^ 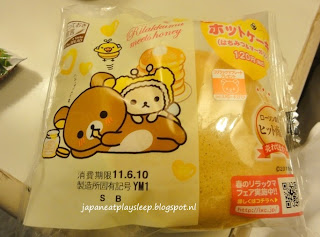 - Onigiri. These triangular shaped rice balls are covered with nori, but packed by plastic in a way that the nori keeps its crispiness and it doesn't get all soggy and soft. You can get all kinds of filling in the center, but the one that I like the most is the tuna mayonnaise flavor. It is the one on the right. For just 105 yen, it is a filling and delicious breakfast. You can also get a couple of these as snacks for on the go. 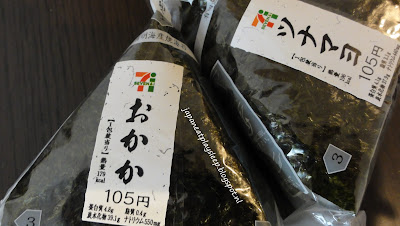 - Chuka man (Chinese steamed bun). 7-Eleven Japan has taken the plain mandu to another level with some interesting fillings. You can choose from the regular pork bun, buns with a red bean filling, bun with a pizza filling, the Hokkaido special three cheese pizza filling bun, a bacon and cheese bun, a Kamifurano pork bun, a pink sakura bun, a pink sakura bun with red bean filling, beef curry bun, bun with a milk cream filling, and a chocolate bun with a rich Belgium chocolate filling. You can find the mouth watering pictures of the buns at the 7-Eleven Japan website. They sell the buns right next to the cash register and it is kept warm in a transparent case. You can buy one for a price ranging from 90 -150 yen. You can also get some oden snacks and fried snacks at the cash register.

- Desserts. It is amazing to see that the 7-eleven in Japan has a little cooled area with tiny desserts. I guess, they have a lot of one person households in Japan as the desserts are really small. Here in the Netherlands, the cakes and pastries are enormous compared to those. They also cost a lot, you pay about 100 yen for a tiny piece of a plain round cheese cake that is about the size of half of your fist or a very small cream puff for 150 yen. I guess, that's why the women are so skinny in Japan. The desserts and pastries costs a fortune there. ^_^ Well, of course they do pay a lot of attention to the quality of desserts. In some way, it makes sense. You eat less, but every little bite is divine. It is a lot more satisfying than eating a large cake that has a bland taste.

Because they seem to treat pudding as something amazing in Japan, I just had to try one there. I bought a Morinaga pudding with a caramel sauce from the cooled dessert area at 7-Eleven. It was not that special to me, but it could also be because the puddings are really nice here in the Netherlands. We are not famous for our milk and cows for nothing. ^_^ 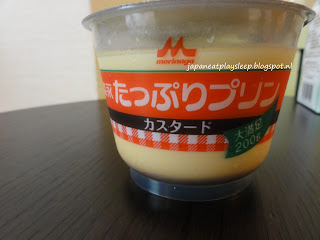 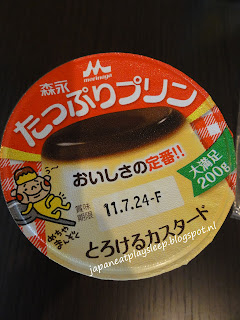 - Interesting drinks. Underneath you can see some of my favorite Japanese drinks. I really like the mild lemon taste of the carbonated Vitamin C.C. Lemon drink. The funny thing is that you can read this on the bottle: "70 lemons worth of Vitamin C in every bottle". But when you look at the content, it says that it only has 1% fruit juice in there. So even though you think it looks very healthy, the vitamin C is added to the drink and it did not come from the natural fruit juice that is in there. Although this is a bit deceiving, it is probably the right amount for a carbonated soft drink. I think that there could be cases that the percentage is even lower, but they just aren't obligated to list the amount of natural fruit juice in a drink at where I live. The second drink is the Kirin Afternoon tea in the Lemon tea flavor. It is a very refreshing tea with an incredible lemon taste. They also have a royal milk tea flavor, which I like a lot too. The drink on the right is a carton of melon juice. At first, I thought it was a melon milk since it was in a carton, but I remember it had a very watery taste. This is quite good as it is more refreshing than milk. The amount of natural fruit juice is 10%, so you can really taste the melon. 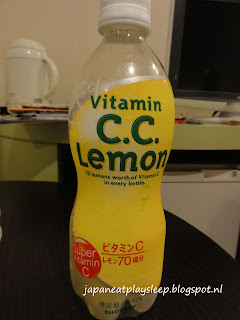 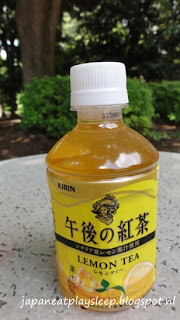 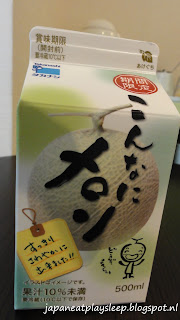 - Cold noodles with sesame sauce, some strips of chicken meat, and bean sprouts tossed in chili oil. I did not think too much from a plastic bowl filled with cold noodles, but the bean sprouts were crunchy and the sesame sauce mixed with the noodles tasted very good. You can also get a bowl of warm noodles that you need to take out from the refrigerator yourself and they will warm it up for you on the spot, at the cash register.  It costs around 300-400 yen. The size is about right for a woman, but getting some other side dishes like gyoza would make you feel more full.

- Cup noodles. This sounds a bit strange, but the 7-Eleven in Japan has special edition cup noodles created by famous ramen restaurants. There are three kinds for you to choose from for 268 yen: the Sumire miso noodles (very famous in Sapporo, Hokkaido), the Ippudo Akamaru tonkotsu noodles, and the Santoka tonkotsu noodles. It would be a nice souvenir for you to take home. ^_^

- Chips and other (unhealthy, but delicious) snacks. I cannot really remember, but I could have also bought these packs of chips at the Lawson convenience store. The left one seems to be colored prawn crackers, the middle one contains thick puffy rice crackers, and the right one tastes the best. It is very similar to the Calbee prawn sticks, but it is a bit thicker and crunchier. I even joked about bringing a lot of bags back to the Netherlands as souvenirs and for myself, but I didn't, since bags of chips are just too bulky and run the risk of being totally crushed, before I even arrive back home. ^_^ 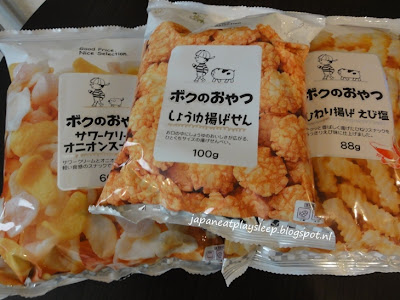 Popular posts from this blog

January 06, 2015
I have always visited cities in Japan with the shinkansen, but I have seen signs of long distance buses around touristy areas before. For instance, when I was in Hakone, I saw a bus that could take me directly to Shinjuku. That is very impressive as it takes about an hour with a high-speed train. Because I easily get carsick, I never considered this option. But recently, I discovered that the buses can have more comfort than I could ever imagine. Take for instance, the seats in the buses from Willer Express, they have fully reclining chairs (up to 142°!) with a cocoon like partition, special ladies-only seats with leg rests that have a built in foot massager and heating + a Sharp Plasma cluster air purifier on board, a hood attached to the top of the seat that gives you privacy, while you sleep, and a personal monitor for entertainment and games at the back of the seat in front of you. It has started to become comparable to an airplane without the discomfort that you might get from
Read more»

September 07, 2015
Previously, I already introduced two conveyor belt sushi places to you, Genki Sushi and Uobei , and today, I discovered another one, Kura sushi . All plates of sushi (mostly there are two pieces of sushi on one plate and for some of the more expensive kinds, you get one piece) are just 100 yen. They have special high-tech plates, so you can just grab the plate through the hole in the front and the plastic, transparent, dome-shaped lid will open by itself. You can also order sushi through the touch screen (in English) and it will arrive in the high-speed track located above the regular conveyor belt. I am not sure if this is the case for all of the Kura sushi shops, but on tv, I saw that you can also play a game on the touch screen after you insert 5 empty plates in the slot located at your table. By winning it, you can get a small trinket/toy in a plastic ball. You can find the menu with clear pictures and prices  here . Warm dishes, such as bowls of rice, noodles, and udon with t
Read more»